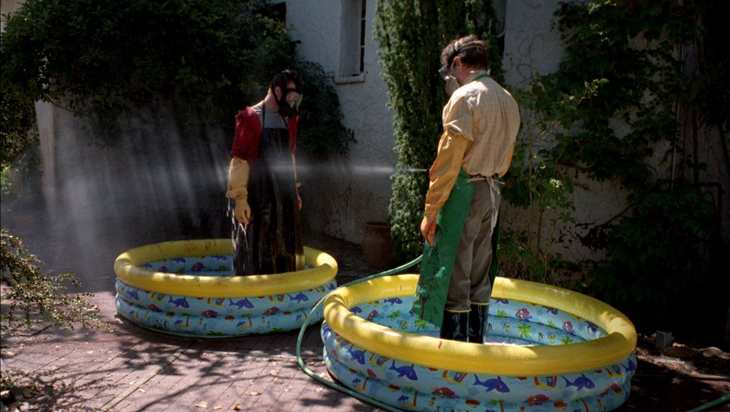 Wearing gas masks, Walt and Jesse clean up the half-dissolved remains of Emilio off of Jesse’s floor.

Krazy-8 is still stuck in Jesse’s basement with a bike-lock around his neck. Walt goes downstairs to talk to him. Krazy-8 reveals details about him that he could of only learned from Jesse. Walt goes to yell at Jesse, who is smoking meth. Jesse flees the house.

Meanwhile, Skylar suspects Walter Jr. of smoking marijuana. She tells Marie, who then gets Hank to teach him about the dangers of doing drugs.
Hank takes Walter Jr. to the Crystal Palace, which is a sleazy motel for hookers and drug dealers. There they meet Wendy, a meth-addicted prostitute with messed up teeth. Hank tells Wendy to take off. She goes to a motel room, where Jesse is waiting for her. 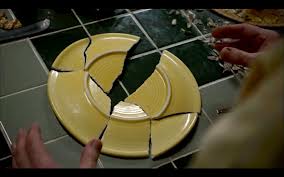 Walt makes a list of pros and cons for killing Krazy-8. His only con? He could hunt you down and kill your entire family. Walt makes him a sandwich, but a coughing fit causes him to fall down and pass out..shattering the plate.
When he comes to, he cleans up the plate and tells Krazy-8 that he’s looking for a reason not to kill him: “sell me” he says. Krazy-8 and Walt have a bonding moment: Krazy-8 shares his passion for music, and Walt talks about his cancer. Walt is finally convinced, and says that he’ll go upstairs to get the key.
When upstairs, he dumps the broken plate pieces into the garbage. Walt notices something strange: he takes the pieces and reassembles the plate. There’s a knife-shaped shard missing.
Walt comes back down the steps. He goes behind Krazy-8, saying that he will unlock the bike lock. Walt then asks him if he’s going to attack him with that shard once he’s set free.
Krazy-8 starts stabbing wildly behind him as Walt yanks the bike lock back. Krazy-8 eventually succumbs, but not without stabbing Walt in the leg.

Out in the desert, Hank and Gomez surmise that a mobile meth lab caused the fire in the desert. There they find Krazy-8’s vehicle, and figure out that someone must have killed their snitch.