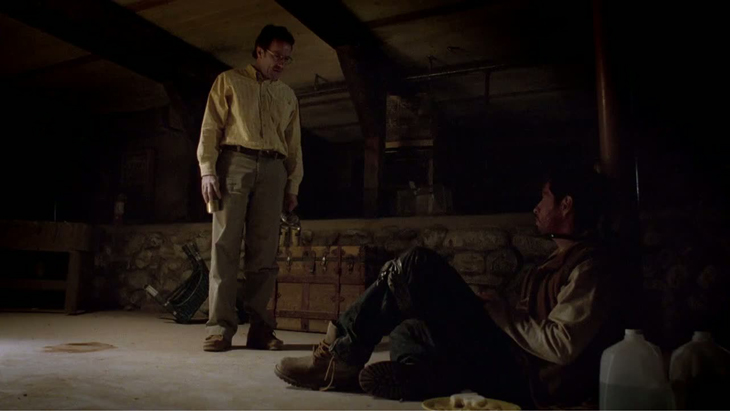 “It’s strange, but there’s a great chemistry between these three characters, like they’re puzzle pieces and their jagged edges aren’t even close to matching, but they fit somehow.”

A tow truck is pulling the RV out of the ditch. Walt and Jesse pick up their equipment in the aftermath of last episode’s craziness. They find everything except for a gas mask, hidden behind a rock.
Walt says that their partnership will begin once the bodies of Krazy 8 and Emilio are taken care of. The sound of the RV starting off makes one of the bodies start moving: one of them isn’t dead.

Jesse calls Walt’s house (pretending to be a telemarketer) to ask for help disposing of the body. At school, Walt steals some hydrofluoric acid from the chemistry lab. Jesse goes to the RV to find that Krazy 8 has escaped.

Walt finds him stumbling down the street. A coin toss decides that Walt must kill Krazy 8, while Jesse gets rid of Emilio’s body. Walt puts off the murder until the next day.

Walt visits Skylar as she’s getting a sonogram of their baby. Skylar (who traced the phone call back to Jesse) wants to know what’s going on. Walt confesses that Jesse is a pot dealer.

Later, Skylar visits Jesse, just as he’s carrying Emilio’s body from the RV into his house. Jesse positions himself so that she can’t see the dead body. Skylar warns Jesse to stop selling pot to Walt. 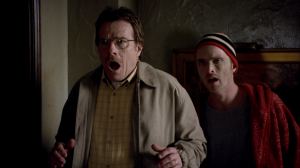 Jesse drags Emilio’s body to the second floor bathroom. Instead of using the tiny plastic bins Walt gave him, Jesse lifts the body into the bathtub and pours the acid all over it.

Walt comes over. Jesse is smoking meth, telling him about Skylar and how he found a better way to dissolve Emilio’s body. They hear creaking, and then the ceiling just below the bathroom gives out. It drops a soppy red liquid all over the floor.

Reviews of “Cat’s in the Bag”:

You can read the full reviews by clicking on the links below.