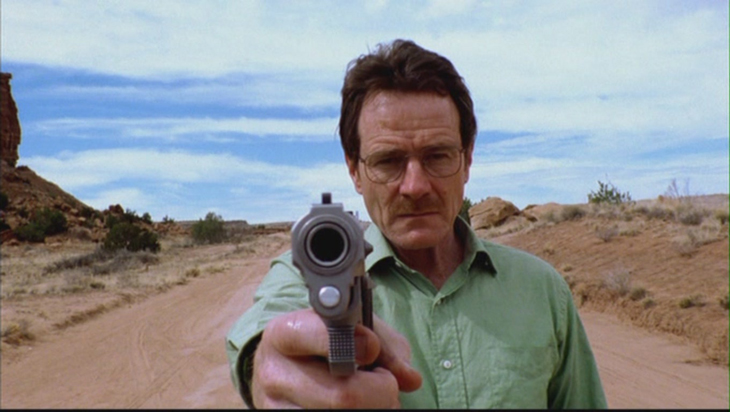 We begin in a vast, empty desert. Then we cut to an RV racing down the road. Then we see the driver: a pantless man wearing a gas mask. He sees two presumably dead bodies sliding around the RV’s floor. The man crashes the RV. We hear sirens in the background. Seeing no way out, the man takes off his gas mask: it’s Walter White. He fires up a camcorder and confesses his love for his family. The episode flashes back to 3 weeks earlier. It’s Walt’s 50th birthday. His wife Skylar makes him breakfast with the bacon spelled out ’50’ on his plate. He takes his son Walter Jr. to school…where he’s also a chemistry teacher.
At his second job (washing cars), Walt is humiliated by one of his students, who takes a picture. After he’s done, he comes home to find that Skylar has thrown him a surprise birthday party. At the party, they watch a drug bust led by Walt’s brother-in-law, Hank. Hank tells them that they recovered “$700,000” from the meth lab. Hank offers to take Walt on a ride-a-long.

At the car wash, Walt starts coughing uncontrollably and passes out. He’s taken to the hospital, where he’s given the diagnosis: lung cancer. Inoperable. Walt accepts the diagnosis, albeit with a sense of detachment. He doesn’t Skylar about the diagnosis.
The next day Bogdan reams him out, and Walt snaps at him. Walt quits and storms out.
He takes Hank up on the offer to go on a ride-a-long. During the meth lab bust, Walt notices an ex-student, Jesse, climb out of a bedroom window (a nude woman tosses Jesse his clothes) and escape. Walt learns that Jesse is a meth dealer nicknamed “Captain Cook”.
That night, Walt goes to Jesse’s house and tells him that they are going to work together. Either that, or Walt will turn Jesse in to the police.
Walt steals the necessary cooking equipment from his high school’s science lab. Jesse arranges to buy an RV. They set out to the desert, and Walt cooks the purest crystal meth that Jesse has ever seen.
Jesse takes a sample of the new, pure crystal meth to Krazy 8, his former dealer. He, along with Emilio, suspect that Jesse was the one who called the cops. They arrange to meet Walt out in the desert, using Jesse as bait.
Krazy 8 offers Walt the chance to work for him. Emilio recognizes Walt from the police raid, and immediately Krazy 8 threatens to kill Walt. He offers to share his secret cooking method to Krazy 8, as barter for his life. He goes in to the RV and creates a poisonous gas by mixing chemicals together. Emilio’s cigarette lights a brush fire. He traps Krazy 8 and Emilio in the RV until they pass out. He straps a gas mask to Jesse, puts one on himself, and speeds out.
We cut back to the present, where Walt finishes his video confession, and tries commit suicide by shooting himself. The safety is on. Walt sees that the sirens coming towards him are not police, but fire trucks. He hides the gun, and heads home.

“Yet as polished as “Breaking Bad” is, in terms of long-term potential (or however long Walt has), it’s the sort of front-loaded affair that invites skepticism as to whether the idiosyncratic tone can be maintained.”