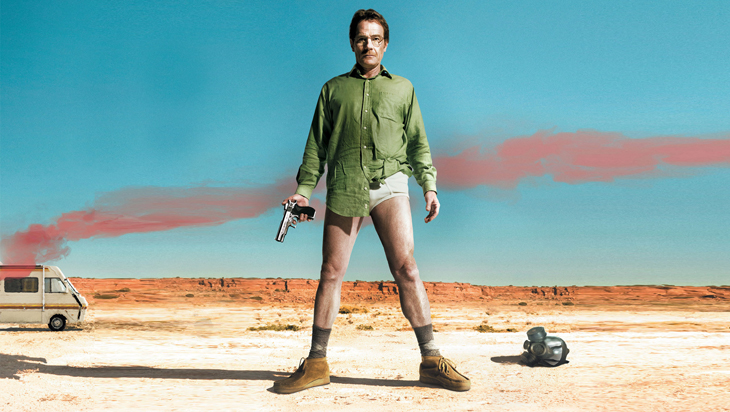 “It’s not a matter of wondering if Breaking Bad will be great, but where in the pantheon it will ultimately reside.”
-Tim Goodman, Hollywood Reporter

After a terminal lung cancer diagnosis, high school chemistry teacher Walter White cooks crystal meth to provide for his family. Teaming up with former student-turned-drug deal Jesse Pinkman, Walt finds himself delving deeper into the seedy underbelly of the drug business…and likes it.
-a crude synopsis, I’ll admit, but how do you sum up a great series like this in two sentences?

“Yo, Gatorade me, bitch” – Jesse Pinkman

“Stay out of my territory” – Walter White

“Jesse, you asked me if I was in the meth business or the money business. Neither. I’m in the empire business.” – Walter White

“Someone has to protect this family from the man who protects this family.” – Skyler White

Breaking Bad Wiki – detailed descriptions of episodes, characters, and the use of science in Breaking Bad

AMC – lots of behind the scenes videos, episode highlights, journal entries from the cast and crew. Lots of ‘spoiler warnings’ on the website so that you don’t stumble upon spoilers.

Vulture – Has episode recaps going to back to early in Season 2. Also includes lots of cast interviews and thought pieces on Breaking Bad episodes going back over the years.